Picked it up in the library by pure accident - the book I was looking for was checked out and I needed SOMETHING.

And my God, was it the best accident imaginable!!

This book is AMAZING!! So well written and so compelling I can't put it down :D And this, sadly, almost never happens :P

So yeah, I'd talk more but I have a book waiting :D

Last night Marie screened 2 Quebec movies for Julia and me, and I can’t not share.

The first was “The Five Of Us” (“Elles étaient cinq”) which was a film about 5 girls who’s been friends their whole lives going to their parents’ cabin in the woods (yep, you can already feel where this is going) for a weekend. They toss a coin to choose who is going to hitchhike to the nearest village to get more beer and apparently maple syrup for breakfast, and two girls – Manon and Sophie – set off.

On the road, they get picked up for the psychopath (a cute one, of course) and the inevitable happens. Sophie gets raped and killed in front of Manon, and then Manon gets raped and stabbed herself. Somehow, she survives.

Fastforward to 15 years later. The guy gets released from prison.

The four remaining friends who apparently drifted away from each other after the tragic incident get together and go back t the cabin. We learn what happened to them over the years, as well as the details of the rape/murder which weren’t revealed in the beginning.

I LOVED that film! It was beautifully made. From the technical point of view, the shots were great. As for the story, it was very simple and yet very powerful. You could basically see inside the girls’ heard – how messed up they were, how what happened affected all of them, how they were so close it hurt them to stay close after the tragedy. And how sometimes people get away with what they’d done and they have a second chance while their victims don’t.

And you can’t, just can’t not like this song ♥

The second film was called “C.R.A.Z.Y.” and it was slightly less powerful than the first one – firstly, because it was a bit less tragic, and secondly, because it was about a guy. I kinda hate saying that but I generally can relate to female characters better.

Anyway, “C.R.A.Z.Y.” was a coming of age story about a gay man in the 70’s-80’s when it was a big deal. He was the second youngest son in the family, and having 3 older bullies of brothers wasn’t making it any easier.

This film also was really good, although unlike the first one, it had too many very unlikable characters, and I had a much harder time following the story because I was too busy being annoyed with most of the people on the screen. Still, the story was bitter-sweet and heartbreaking, and it was quite shocking to see how little changed since 70’s and 80’s in terms of social understanding and acceptance. Yes, it was generally a coming of age story, but I would also refer to it as ‘how society ruins people’ story as well.

Took mom to the airport.

Couldn’t. The break down will prob happen soon though.

She bought us two funny pillows in the gift shop. Hugging mine now. The apartment feels empty.

It doesn’t matter that I’m 2-freaking-8, I miss my mommy :( It’s been a long year, and who knows when we’re going to see each other again.

We had the most amazing 2 weeks though :) So much fun and bonding and stuff. Not really having friends was easier when she lived closer :S Damn my social awkwardness! Damn the distance! :(

Finally got to see “We’re the Millers” last night.

It is officially my favorite film of 2013 so far xD It was so awesome!! Incredibly hilarious but smart, never dragging, very fast paced, with nice twist and turns, and a very interesting resolution. Maybe a tiny bit predictable but nothing to complain about. I was laughing nonstop. The acting was good, the cast they chose for the film was perfect. And Jennifer Aniston… well, I’ve been a fan for almost 20 years not (WOW!!) She’s always the best. I should have known.

My initial concern was the whole weed dealing thing, as it is a personal pet peeve I can’t seem able to overcome (sorry, not sorry), but the way they played it out worked very well. And more importantly, it wasn’t dumb like 95% of comedies I’ve seen in the past few months. Like, all of my friends were going crazy over “This Is The End”, and I apologize if any fans are reading this, but this film was the worst way I could have possibly wasted 2 hours and $13, and I’m not getting back either.

“We’re The Millers”, on the other hand, regardless of being absolutely unrealistic – but then again, it’s not what we go to the movies for – was rally… well, adorable. Don’t want to go into details (aka spoilers) in case someone hadn’t seen it yet, but I do highly recommend it if you like smart but incredibly funny movies :)

Go and see it now!

~My BFF moved back to Seattle :S Me iz sad :( I did, however ran into him at the bus station on the way to Whistler coz he was in Van for one night because of some show or whatnot. Freaked my mom out (a lot) when I suddenly squealed and threw myself at him :) Sorry, mom!

~ Gotta start looking for a new apartment to move (hopefully) in October. Can we please skip the whole looking-packing-moving part and go right to settling in the new place?

~ Crush is still here but he moves to Toronto in a couple of weeks. I was thinking about talking to him but chances are, I’ll chicken out and just hole up until it’s too late. Again, nothing new.

~ They don’t have Yves Saint Laurent’s “Baby Doll” in Canada O.o How am I supposed to live without my fave perfume??? Same goes for Shediran’s liqueur but I kinda got used to it already. But “Baby Doll”!!! Gah!

~ When I was in Victoria, a friend texted me with the news about our mutual friend who, apparently, was at the hospital after the suicide attempt :/// And I don’t even have direct contact with her coz she’s in Europe :( WTH?? This is just too big and too horrible to process :( Gonna try to find out more as soon as I can :( Impossible to wrap my mind around it.

~ Saw Wolverine with Julia. Yes, I’m a fan of the X-men series, in general. They don’t have much plot but they do normally have hot shirtless guys and some cool action scenes, so that’s ok. Not sure what I expected from this one but it wasn’t “Transformers-meet-Anime” o.O Not saying it was a bad thing or anything, just not what I expected AT ALL. It feel like it was sort of X-men’s response to Fast-and-Furious’s “Tokio Drift” coz apparently Japanese stuff is popular these days?

~ Do I or do I not turn this blog into a music blog? Probably not completely, but I should a least start reviewing the bands I go to see :)

~ Job hunt? Not my fave thing but gotta start thinking about it:/ ~le sigh

Having mom around is cool! finally got to do all the touristy stuff I never had time for before :) And I hadn’t seen her since last August :P That was hard.

She loves it here and I’m happy about it. The only downside of her visit (and I hate myself for finsing one because the news about her coming over was the best thing that could have happened!!) is that I have to sleep on the couch. :/ My back, and my neck, and about 1000 other parks of my body hate me so much right now. Ouch!! But it’s worth it, so I’ll just shut up :) 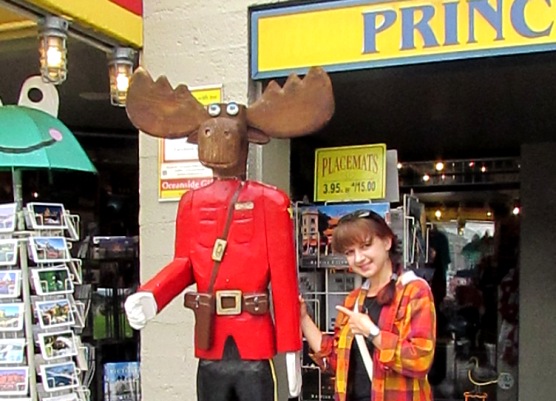 Victoria is so pretty!!! 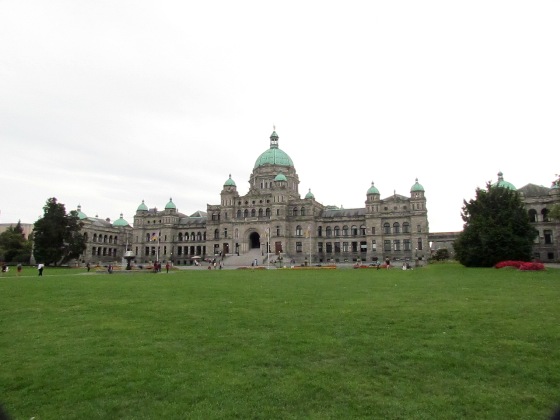 It was a dark and stormy night.... 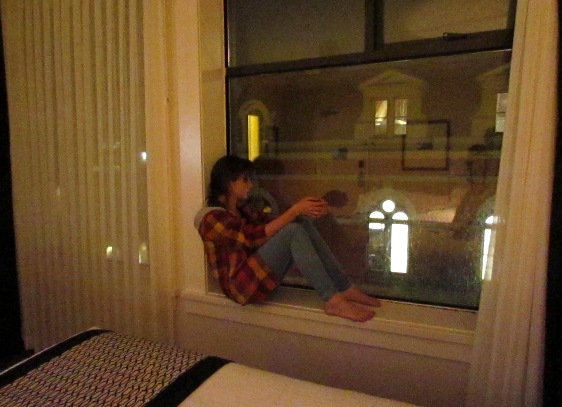 And of course we picked THE rainiest day of summer to go to Whistler :P What else is new? 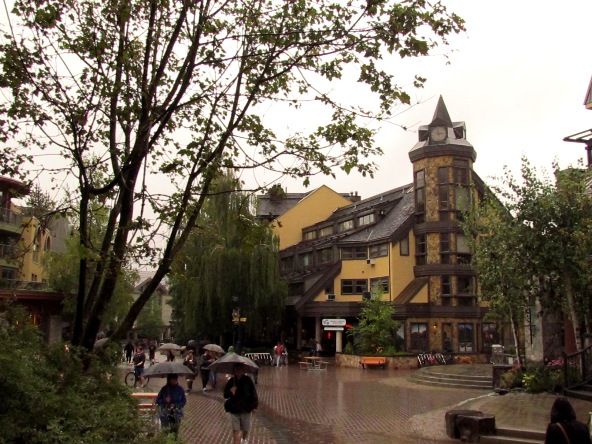 Nothing, nothing will ever be as good as “Thanks for the memories” but it was indeed an entertaining read. As always, her writing style is just exquisite. And don’t get me started on how I miss everything Irish :/

I am currently 4 books behind my Goodreads reading challenge :P Feeling so bad about it! Last year I was at least 5 books ahead at all times :S Gotta start catching up fast! It’s kinda horrible that I couldn’t read as much as I used to this year ~le sigh

Moving on to "Days of Blood and Starlight"!

Okay, at first it was rather embarrassing, with all the interviews of us they were screening for everyone, and all the sad and weepy messages and stuff :P (and OMG, my voice is so horrible! How do I even have friends?? Jeez!)

But it was cool, and hilarious at times. And all the teachers that managed to make it there? Well, so grateful for that! I mean it’s all cool that we’re all “grown-ups” now (don’t..!!!) but I’m not sure we’re ready to live in the big and scary world without some guidance yet :P God, I speak like I’m 12 :P Aaaaanyway….

It was the grad party that turned very bittersweet because people started crying and stuff. Well, the guys started crying The guys got drunk and started crying. The girls were just staring because, duh? That was too OOC to process at the time. Hm…

I refuse to think about any of that just yet. It’s too sad and just too—IDK I refuse to face the reality, deal with it. This year was just too good to just end :P And yeah, I do expect to sink into some sort of post-graduation blues anytime now :S It feels nice to have a break but it feels a bit too much at the same time. There was a certain kind of stability and comfort in having the same people around you for a year. How can it change now?

*My crush is moving away!!! Goddammint, can someone give me a hug and a tub of ice-cream?

Can someone shoot me now?

Yeah, there’s this guy in my class, and I didn’t even care about him until, like, two weeks ago, and he is basically all I can think about, and he is totally NOT into me (because he is not blind or stupid or whatever, so obviously he knows better than that). And even if—well, he‘s moving back home after the grad.

The most ridiculous thing is that we have so much in common it’s freaking creepy. And he’s so nice. And cute.

And did I mention “shoot me now”??

I’m gonna crawl into some corner and cry now.

Except I don’t do crying. So… Ideas? This just sucks :P

PS And then there’s, of course, a guy who has a crush on me, and who is quite direct about it, and who I don’t like AT ALL :S Life is so damn unfair :/
Collapse